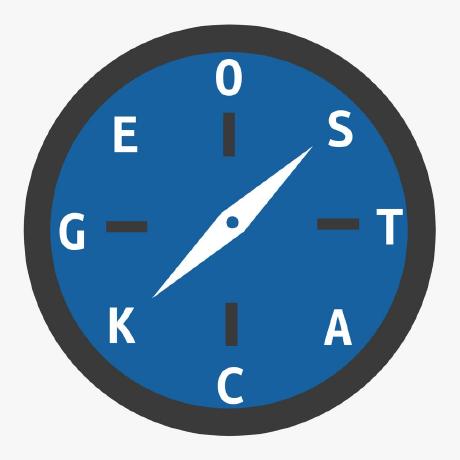 The repositories of the The GeoStack Project and the project’s YouTube Channel are online as of midday, October 14, 2020!

‘Presenting The GeoStack Project’ –> Check out this 6 minute overview video!

The learning goals of this course are to create and run a free and light-weight Open Source Geospatial Software Stack, the GeoStack for short, in a Virtual Machine (VM) with Ubuntu Linux on a stand-alone pc or laptop and to program webapplications to visualize geospatial datasets on locally hosted topographical digital maps from OpenStreetMap and OpenSeaMap.

So this course is about downloading some manuals, software and data sets from the internet, adjust it so it can run on the pc in ‘airplaine mode’ without an internet connection and then learn how to install and configure the GeoStack and program Geospatial Web Applications by using 100% Open Source Software, Open Standards and Open Content!

There are 3 learning goals:

The end goal is to learn to program three end-user webapplications in TypeScript using the Angular framework in combination with the geospatial JavaScript frameworks OpenLayers and Cesium to plot data from datasets on digital topographical maps that the end-user can run from a webbrowser:

The intermediate goal is to learn how to build three web services with an API for the web applications to use.

The starting goal is to learn about the approximately 50 software components required in the Client / Server software architecture you will need to download, install, configure, program and run to be able to use the end-user web applications in your web browser.

The course consists of a 1-day Workshop followed by a 10-day Course when you have some basic programming skills in Python and preferably in TypeScript or JavaScript too.

Don’t worry if it takes you a little longer because you will get there with the user friendly installation and programming manuals with lot’s of screenshots and the Python source code files in Jupyter Notebooks and example scripts in Python and TypeScript with lot’s of inline comments!

If you are on the other hand a real beginner in programming, you might want to invest some extra well spent study time first as a newbie to get to the required skill levels to follow this course as per the advice below in the section ‘Skill levels’!

1 - Basic skills in Python programming are a must!

2 - Basic knowledge in TypeScript / JavaScript + Angular is an advantage

Course structure To get fast situational awareness there is a 1-day GeoStack Workshop to build the Workshop VM with installation scripts which is documented in both a manual and in a series of presentation files to carefully read to get step-by-step to a working GeoStack and basic end-user webapplication.

About the 1-day GeoStack Workshop To learn most of the components of the Development Environment, which is described below, to install the required server software for the GeoStack and to program a webapplication this workshop will take you through the whole process to get familiar with the server and client software architecture for geospatial programming.

If you are not yet familiar with the components of the Development Environment then just take a day extra to read a little more.

If you’re in a hurry (not recommended!) or just curious then simply run the installation scripts to get to a working GeoStack and webapplication more quickly.

This will take a serious time investment of 10 - 20 or even 30 days of study time to read and experiment with the software and datasets but after that you will have build a GeoStack VM from scratch and you know how geospatial web applications work!

You will also learn to use Docker Containers to run applications and Docker Volumes to host data. For topographical sea maps you will learn how to add the OpenSeaMap data of nautical objects to your spatial database PostgreSQL/PostGIS and visualise these objects with OpenLayers in a data layer overlay to create a digital nautical map.

At the end of the course you will have 3 working end-user web applications that run in your web browser to visualize geospatial datasets as basic programming examples for future programming projects and knowledge building:

Building the Course VM is documented in the cookbook ‘Creating the GeoStack Course VM’.

The full GeoStack Course is documented in the following set of detailed Cookbooks and Programming manuals:

The Development Environment in this course will learn you about the following subjects:

3) The programming languages used are Python and TypeScript/JavaScript.

4) Declarative languages: SQL for relational databases and for web pages of the end-user web applications HTML5 and CSS3 are used.

6) The ETL-Process (Extract, Transform and Load):

10) Storing datasets in a NoSQL datastore: learn to use the JSON document datastore MongoDB for…

11) Storing datasets in a SQL datastore: learn to use the RDBMS PostgreSQL in combination with the spatial PostGIS extensions for storing RAW OpenStreetMap data and storing geospatial data from ShapeFiles:

13) Creating a middleware web service with an API using the Python micro web services framework Flask and a Gunicorn webserver:

Advice GeoStack Course: first build the Course VM the easy way with the installation scripts to explore and then do it the hard way by really learning some serious Systems & Network Management in building the GeoStack and programming the web applications!

Note: in the manuals on how to create the VM’s you will find detailed instructions about:

1) First of all: read the weblinks on this web page! They paint the picture! Then read the cookbooks, manuals etc.

3) Third: remember in programming ‘a point is not a comma’!

4) Finally: make copies of files before you change them!!!

–> Make it a habit to use a file copy and you’ll be safe and save yourself a lot of time!

1) Educational goal: the software and content of this project are only intended to learn about programming geospatial dataset processing in Python and programming webapplications in TypeScript for the visualization of this geospatial data on digital topographical maps.

2) Software selection: this course focuses on creating an Open Source geospatial software stack, the GeoStack, to develop and run webapplications for visualization of geospatial datasets. There are more Open Source Software products that can provide the same functionality as the products chosen in this course.

3) Complexity reduction: some well known software products are left out of scope in order not to complicate things more than necessary for an already fairly complex beginner course, like:

Scope Note: software, installation and programming mannuals for the left-out-of-scope software and file formats mentioned above could be easily added to The GeoStack Project if volunteers would be willing to make them!

This programming course was originally created by computer science student Pieter Lems of the Rotterdam University of Applied Science (Hogeschool Rotterdam) as the result of his 3rd year Bachelor internship assignment (201909-202001) in practical programming for data scientists.

The motivation to create this course is to collect and combine all the very much fragmented information from many manuals, (video)tutorials, applications, programming languages and frameworks, file formats etc. into one documentation set for beginners in data science, programming and systems managment to learn to download, install, program and use all the software components and datasets in one logical workflow to get:

This project is published by the MoD-NL as an Open Source Software educational project with Open Content for easy re-use.

The software of The GeoStack Project is released under the European Union Public License (EUPL), Version 1.2.

The content of The GeoStack Project is released under the Creative Commmons Attribution License (CC BY), Version 4.0.

Take also careful notice of the following Terms of Service applicable to the use of The GeoStack Project software and content available in:

Any and all datasets, software and online services used in this course from third parties are (re-)used under their own respective licenses.

Please refer for attribution to this project as: The GeoStack Project (https://The-GeoStack-Project.github.io)

If you refer to specific documents or videos of the project please follow these Creative Commons guidelines on ‘Best practices for attribution’ to compose your weblinks correctly.

Content means installation manuals and programming manuals, other documentation such as the files and web pages of the project on GitHub and Google Services such as Google Drive and the YouTube Channel and other content such as datasets, images, photos, videos, audio, the blue GeoStack ‘Clock-Compass’ logo etc.

If you harm someone else or get into a dispute with someone else, both we (The GeoStack Projects and its members) and the contributors of this project will not be involved.

You understand and agree that you will indemnify, defend and hold both us (The GeoStack Project and its members) and the contributers of this project harmless from and against any and all claims, liabilities, and expenses, including attorneys’ fees, arising out of your use of the software and content.

Both we (The GeoStack Project and its members) and the contributors of this project expressly disclaim any warranties (express, implied, or otherwise), including implied warranties of merchantability, non-infringement, fitness for a particular purpose, or title, related to the Software and Content.

The Software and Content of The GeoStack Project is provided ”as is,” and ”as available”.

Any other application or use of the Software and Content other than for educational purposes is not intended and not advised!

THE GEOSTACK PROJECT, ITS MEMBERS, OR CONTRIBUTORS ARE IN NO EVENT LIABLE TO ANY PARTY FOR LOST PROFITS OR ANY FORM OF INDIRECT, SPECIAL, INCIDENTAL, OR CONSEQUENTIAL DAMAGES OF ANY CHARACTER FROM ANY CAUSES OF ACTION OF ANY KIND WITH RESPECT TO THE GEOSTACK PROJECT SOFTWARE OR CONTENT DELIVERABLE OR ITS GOVERNING AGREEMENT, WHETHER BASED ON BREACH OF CONTRACT, TORT (INCLUDING NEGLIGENCE), OR OTHERWISE, AND WHETHER OR NOT THE OTHER MEMBER HAS BEEN ADVISED OF THE POSSIBILITY OF SUCH DAMAGE.

Please take special notice of the GitHub Terms of Service for contributions under the repository licenses, including contributions made to The GeoStack Project software and content in any of its repositories.

If you contribute software or content to The GeoStack Project in other ways than by means of GitHub, you also agree that the same software and content licenses (EUPL Version 1.2 and CC BY Version 4.0) will be applicable to your contributions as well.

Click the blue buttons at the top of this webpage to view the project’s public repositories and check the Issue Tracker, the Wiki pages or the latest News.

Overview GitHub Repositories - The project has 5 repositories and for two repositories there is a convenient blue download button at the top of this webpage.

3) GeoStack-Workshop: the repository for the 1-day Workshop that you learn to download in your Linux Virtual Machine when following the cookbook ‘Creating the Workshop VM’.

4) GeoStack-Course: the repository for the 10-day Course that you learn to download in your Linux Virtual Machine when following the cookbook ‘Creating the Course VM’.

5) The-GeoStack-Project.github.io: the repository for this home page.

2) Drive: non-public cloud drive for backup of the project and project team cooperation.

Support –> Reporting Bugs and Providing Suggestions with tickets only!

The project team is only accepting tickets in the Issue Tracker but with no promises to response times or realisation!

Use the Issue Tracker to post a Ticket with the label ‘Contact’ if you want to request a personal conversation with one of the team members and also include information on the subject you want to talk about.

Currently we are not accepting pull requests from GitHub users other than the current team members.

The project is currently published as-is with a project team of only a few volunteers for very, very low maintenance without making any promises!

New team members are needed to make this project an active Open Source project because, with around 50 software and content components that will be updated over time, the project is expected to have a limited shelf life of around 12 months. Without maintenance the project will then need to be either archived or removed.

This work is licensed under a Creative Commons Attribution 4.0 International License.